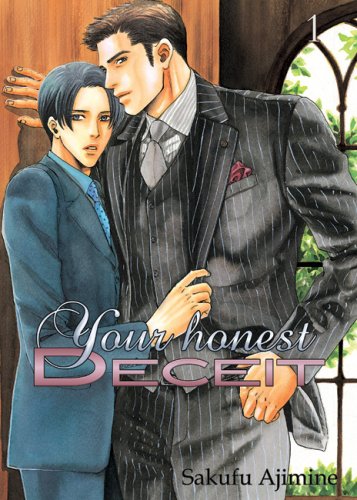 Art and Character Design: Very competent. There is rarely much detail in the background, but the characters are well-designed, each with a distinctive look that approaches more “Western” realism. Both the pouty bishonen young adults and the clean-cut, hunky “geezer” (at age 41, thank you) are attractively drawn and masculine. A particular talent of Ajimine-sensei is the use of chibi versions of her characters, who appear frequently and to good comic/narrative effect.

Characters: There are two pairings in this book, both with a separate series of chapters devoted to them. The main pairing from the “Honest Deceit” chapters comprise Kuze, a twenty-something legal assistant, who is pining away for his 41-year-old boss, Kitahara. Now, as you know, I do have a fondness for sweet, clueless characters, but Kuzu is such a shrinking violet, he is practically a cipher. Putative workaholism aside, he is completely defined by his attraction to this older man, his only desire/aspiration/interest being to express this love. The seme, Kitahara, is not much better, being little more than a nice, slightly clueless guy with mild late-in-life coming-out issues. The second pairing, in the three chapter “Special” section, is a little more interesting. Again, older/younger and former teacher/student, the leads at least seem to have some personality outside of the romance. The older guy, Toru, has a passion for “cute” things, such as stuffed animals, that can get him into trouble with his partners, and the younger guy, Yuu, is a pouty hot-head, which can also be a source of drama in his relationship. None of these characters, though, are really all that much fun to hang out with or get to know.

Plot: I really did want to like the story — here we have a well-drawn yaoi book with actual grown-ups! But the conflicts come from seen-it-all-before unrequited-affections angst along with the usual petty jealousies stemming from simple misunderstandings. A little bit of juice comes from the older/younger power imbalance potential, with both younger partners eventually crying out their desire “not to be treated like a kid!”, but as a lot of the sexual tension comes from maintaining this imbalance, this conflict is really more sizzle than steak. The most interesting story potential rests with Kitahara — here is a man coming out in his 40s, starting a relationship with an obsessed co-worker — but this major life event is merely given the most superficial of treatments so as not to get in the way of the romance.

Romance: The “L” word is used a lot. These characters say they love each other, often can’t keep their hands off of each other, other people in the room become practically invisible because of this “love”, and yet, as these characters are mere sketches, it’s hard to know what all the fuss is about. Kuzu has been pining away for his current boss since Kitahara was his teacher in school eight years prior, but why? Kitahara says he now returns this love with great passion, but again, why? Despite the chronological maturity of these characters, the romance feels more like an adolescent’s take on love — that is, being in love with the idea of being in love — rather than an exploration of the special connection between two people who are right for each other. Thus, it is difficult to get behind. Everyone’s essentially a good person, so I do wish them well, but if they had all wound up with different people, I would have been just as OK with that, too.

Sex: Pretty good. One of the book’s strong points is making the “first time” scene between Kuzu and Kitahara believable — it definitely does believably feel like this lawyer’s first experience with another man, and the butterflies-in-the-stomach and awkward actions actually feel quite in line with my own personal experiences when getting to know someone new physically. No dangly bits are actually shown, but we see enough quality art for it to be erotic. As the characters themselves left me cold, it didn’t really get my motor running, but those of you with a teacher/student fetish should be in hog heaven. (The word “sensei” is used in the book so often, particularly during those special moments, it made me wonder whether Ajimine-sensei was perhaps going for the world-record.)

Overall: If good, masculine character art and fine, but not explicit, “older/younger” sex scenes are enough for you, then you might consider picking up this book. For the rest of us, there are other, better books out there for our $12.99.

As a university student, Kuze secretly harbored feelings for the lawyer-cum-lecturer, Kitahara-san. However, knowing his professor was married, Kuze sealed away those emotions.

Now, seven years later, Kuze finds himself working as Kitahara’s assistant because of a bizarre coincidence. What’s more, Kitahara is no longer wearing his wedding ring…. Can Kuze revive his feelings and reach out for happiness?

Is it me or does even that plot description sound a bit, well, dull? I mean, I’m all for “reaching out for happiness” and everything, but I actually need to care about the character to want to spend time reading about that and, as I’ve said above, there’s not a lot of “there” there with these guys. Thus, while I realize that being self-effacing in the Afterword is practically required in yaoi books, I can’t help wondering if even the author wasn’t aware of the squandered potential of this set-up when she says “I originally intended to pen an adult, elite, gorgeous (was that it?) tale, but before I knew it, it devolved into a geezer fetish and windbag lawyer story.”

I’m reminded of Jen of YaoiSuki’s complaint about Little Butterfly (which, as you know, I take exception to) when she said “There was nothing *wrong* with it per se, but it just felt like there was nothing *right* with it either.” The character motivations in Your Honest Deceit, while simplistic, are clear and it never feels like the author is cheating or manipulating events to get her guys together (or to create conflict). It’s just that there’s little here we haven’t seen before, and it really wasn’t all that interesting the first time.

The exception to this, as I said above, could have been the “coming-out-story” of Kitahara and her instincts into his feelings do feel right to me — so, it’s a shame she didn’t choose to tell that story. Additionally, in the second romance story, she brings us into a gay bar, complete with an old drag-queen college buddy of Toru’s, that also had the ring of (granted, cliché) truth to it — perhaps there was more to explore there, too.

Of course, one of the things I really like about yaoi is that we don’t have to run through the obligatory beats of being gay in an oppressive culture to enjoy a romance between two guys. But considering Ajimine-sensei’s set-ups, it felt like the real meat of the story probably was, in fact, to be found in some of that material and I imagine, based on the minor touches mentioned above, she could have handled it well.

But really, this is nothing more than my speculation about what that “adult, elite” tale might have been. Perhaps in later volumes she gets there, but for now, the tone certainly feels far more “young-adult” than actually adult.

Now, as Jen might say, there’s nothing wrong with that — but unfortunately, in this case, as far as story and character are concerned, there’s not much right with it, either. Your Honest Deceit is well-drawn, competently-written yaoi, so reading this book is certainly more interesting than, say, organizing your sock drawer. But ultimately, you’ll probably feel it would have been a better use of your time to have gotten those pesky socks sorted…