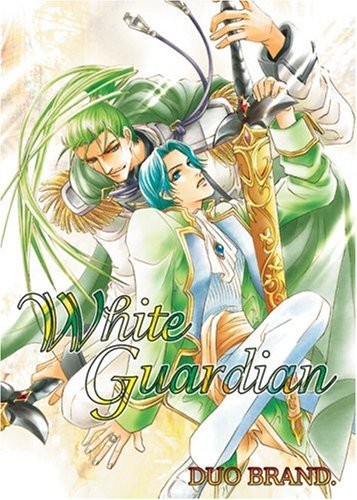 Art and Character Design: Quite good in places and, in others, confusing and lackluster. For the most part, the character art is excellent — with beautifully drawn bishonen characters in striking poses, framed with flowers and bubbles. The chibi art starts off in the first chapter as some of the weakest I’ve seen, but by the end of the book, these artists seem to have found their chibi-style and some of that becomes quite nice also. Many panels are unclear, however, due to a lack of variance in the lights and darks — the foreground objects blend right into the background objects (and speed lines) making it difficult to understand what exactly is happening. In some cases, I felt this was a deliberate choice — particularly in the sex scenes where I think the goal actually was to obscure the action — but it would occur with some frequency in the fight scenes as well, making it difficult to get caught up in the excitement.

Characters: Disappointing. For our romantic heroes, we have an 18-year-old prince, Linth, and a 30-something general, Sei, whom Linth appoints as his “Director General of the Imperial Guards” shortly after being raped by him. Yes, you read that right — the boy appears to have a unique interview process. Now, enough care is actually taken in developing General Sei’s personality and motivations (including reasons for the rape and his later overprotectiveness) that at least he feels full of potential. Almost all the flashbacks concern him and his backstory seems laden with drama and mystery. We can’t, unfortunately, say the same for Linth, who is portrayed as little more than a male nymphet whose main job seems to be to get in trouble, fall out of his clothes, get raped and cheerfully bounce back to want more sex with Sei. He makes a lot of noise about wanting to reform his Kingdom (Landa) but seems so foolish and does so little about it, it is baffling why anyone believes him. Truly, he’s the kind of character who gives “sunny ukes” their bad name. There’s a romantic rival, Baron Touri, who also rises to high position by raping the Prince (and to Prime Minister this time — he must’ve been pretty good…). With strong motivations of love, jealousy and duty, this rival could also have been interesting, but we learn very little about him other than that his subjects love him and that he used to top Sei, so that potential is also not realized. In the right hands, I could see how you might want to get to know Sei and Touri — but we spend most of our time with Linth and these most certainly are not the right hands.

Plot: Flimsy and contrived. The first few pages hold some promise of fun action-adventure-fantasy yaoi, but any plotting concerning battles and castle politics quickly devolves into an excuse for sex, rape and the occasionally Prince rescue. Characters make choices that make sense only in that they enable the next pairing or encounter. Dramatic reveals have no power because no time whatsoever is taken to set them up. The plotting feels like a paint-by-the-numbers imitation of every bad swords and royals drama you’ve ever read. To be fair, at the end of the book, there is an invasion plotline that the authors’ seem to actually care about, but we’ve learned so little about the players, it’s impossible for us to care about the stakes. In a sea of unpleasant traits, the storytelling is easily the worst and most neglected aspect of this book — honestly, it makes Kyo Kara Maoh seem like The Lion in Winter in comparison.

Romance: Well, they seem to love each other, so there’s that. Too bad, again, it’s almost impossible to care. Linth is such a consistent fool, it feels like Sei’s interest in him has more to do with his inner demons than any real connection. And Linth’s interest in Sei, while making more sense, seems to go little deeper than a childhood crush. They’re both very pretty, but beyond the eye-candy, there’s really not much to see here.

Overall: There’s some good character art in places and what might have been a fun set-up, but really, this is an awful book. Save your money.

Rated by the publisher “For Mature Audiences 18+.”

The Kingdom of Landa, once a proud country, is weakened by internal espionage and strife with its neighbors. In order to save the country, Linth Highwind Belc Landa IV, Crown Prince of Landa, returns to his country determined to bring about change. But missing from his plans is a man – the one man who had left behind the intrigue of the palace for the freedom of the sea.

General Sei – Landa’s legendary hero – now guards Landa from his command post on a naval ship. Unknown to the General, among the new ensigns on board is a young Prince who is secretly plotting his return to shore! As fate has it, the opportunity comes when the General saves Linth during a fierce battle. Using his gratitude as an excuse, the Prince confronts the General about his absence from home – but suddenly finds himself at the General’s mercy! How far will Linth go to bring Sei home? Can a battle weary soldier become a guardian angel?

I have a confession to make — I don’t like writing critical reviews. It’s funny — I enjoy reading them. Some of my favorites are really quite brutal (Roger Ebert’s review of North comes to mind, although I’m also rather fond of his review of the much-overrated Trick as well).

But creating a graphic novel is such a Herculean feat — let alone publishing one — I’d much rather give creators and publishers a pat on the back than a kick in the teeth.

Thus, when I dislike a work, I read and reread it, looking for nice things to say. Somebody thought making this book was a good idea, I reason, I just need to figure out why and share that with my readers. As you can tell, however, despite four readings of White Guardian, I have failed to find much deserving of praise. There are spoilers below, but that implies that there is something here of enough worth that it actually could be spoiled.

This is the kind of book that exemplifies bad yaoi. Contrived, cliché plotting; shallow, insipid characters; rapes that have as much emotional impact as a haircut…

And yes, let’s talk about the rapes. I won’t bore you by suggesting that having the victim consistently and immediately lobby for the forgiveness of the rapist is, in itself, offensive. In truth, the Prince’s responses are so ludicrous as to be laugh-out-loud funny. After Linth is raped by a jealous Touri — and this is the rape that leaves Linth a bloody mess on the floor, mind you — Sei understandably wants to go knock the rapist’s block off. But Linth vigorously dissuades him from that path saying “He really loves you — so much so that he could do something like that to me… He and I may have our differences, but we love the same person…. Can’t you forgive him, Sei?” Yeah, Sei — it’s a love thing, get over yourself! Poor Sei is left with nothing to do but give in with a “I suppose I don’t have the right to hold a grudge against him.” Truthfully, there are some days where it just doesn’t pay to love a sunny uke…

Ah, but let’s see if I can say some nice things. This is a DramaQueen book so it’s well-produced. It has a glossy color page up front that highlights the unusual hair colors of our protagonists (blue for Linth, green for Sei). Some of the chapters end with a short chibi comic that offers character backstory — and the best writing can, in fact, be found in these short strips. (At least a couple made me chuckle.) And I really liked reading DramaQueen’s description of the book: But missing from his plans is a man – the one man who had left behind the intrigue of the palace for the freedom of the sea. Now, that’s poetry! Maybe they could give that writer a shot at her own book.

But White Guardian is a clear misfire. Reading it once was painful; four times qualifies as masochism. If you’re into the whole non-con, S&M thing and you’re tempted to buy White Guardian to satisfy that itch, picture me reading the book over and over instead — I promise that image will be far hotter, darker and more interesting than anything you will find within its pages.

For a very different (and quite funny) take on the same book, check out Jordan Marks’ review over at YaoiSuki. (Here’s to hoping you get your pony, JM!)

And finally, just in case Jordan brings you over to the dark side, there’s mangamaniacafe.com’s review to keep things in perspective.