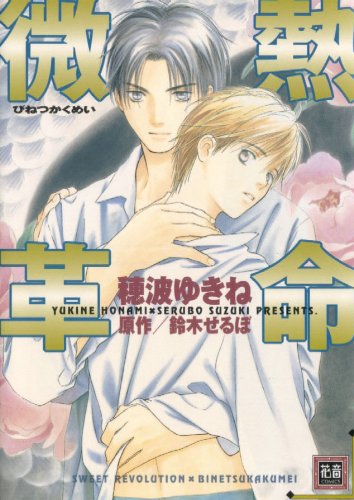 Art: Overall great. Attractive, sweet-looking masculine characters. Rarely confusing and often interesting layouts and framings. The artist was the reason I ordered the book in the first place and was not disappointed. Art on cover is very consistent with interior pages. B/W on better-quality newsprint paper.

Characters: Three-dimensional, motives are nuanced, layered and ultimately understandable – I never smacked myself in the head feeling a character just did something to move the plot along. Not a single character in any of the main stories I didn’t want to know better and almost all of them I’d like to spend several days (or books) with.

Plot: Takes a couple chapters to decide what it’s about, but once it does, it becomes a very engaging read. The well-realized and complex characters face interesting obstacles to their love that don’t feel contrived or cliché, while still feeling very much like traditional Yaoi (or at least, shonen-ai.) The resolution of the conflicts felt consistently satisfying.

Romance: Starts off with what seems to be a standard seme/uke insensitive-tough/vulnerable-waif pairing that gradually reveals itself to be a much more complex and interesting relationship. By the end of the book I really believed these characters cared deeply for each other and I was happy that they were together.

Sex: Even though the sex scenes are not very explicit (one amazon.com reviewer wondered if it was nothing more than “naked hugging,”) they have a fairly strong coercive, non-consensual flavor — definitely a turn-off for me, particularly considering how youthful the “victim” appears. For the actual sex, nobody really seems to be having a good time. The sex moves the plot forward effectively and is necessary to the story — so bravo for that — but it’s definitely not the reason to get this book.

Overall: Don’t get it hoping for hot, fun sex but with great art, great characters, sweet romance and an engaging and dramatic fairy-tale plot, this book’s a winner.

Rated by the publisher “For Mature Audiences 18+.”

Tatsuki and Ohta are two beings from a supernatural, mythical realm, masquerading as “cousins” in the human world. Tatsuki is in fact the successor to Ryu-Oh, the dragon king, and possesses the power of the Nyoi-Houshu, a magical dagger. Ohta is a Zashiki Warashi, a protective house-spirit without a home, and is also Tatsuki’s subservient lover. When their human classmate, Kouhei Misaki, accidentally witnesses the two having sex, he mistakenly believes that Tatsuki is forcing the quiet Ohta into it, and he resolves to break the two apart.

I bought this book after reading a previous Yaoi book featuring art by Yukine Honami, Desire. The art was some of the nicest I had seen in a Yaoi book and I’m a sucker for sweet-looking guys — apparently Yukine Honami’s trademark. The art in this book did not disappoint, delivering drawings of cute, sweet-looking, masculine guys with great expressionality — you really know what these guys are feeling.

The art is a big reason why the characters are compelling, but props also need to go to writer, Serubo Suzuki, for crafting a familiar, yet very compelling Yaoi story of boy-being-being-used-by-boy, boys-facing-obstacles-to-their-relationship and boys-finding-out-they-really-do-love-each-other-and-are- right-for-each-other plot. Part of the reason this is so compelling is that the authors have created such an intriguing, magical world for the characters to inhabit. It felt like Suzuki drew upon both Japanese and Chinese mythology to show us magical beings who are definitely not human, but completely understandable and sympathetic. I found myself wanting to know more about the magical realm the “cousins” are from — its history, its relationship to Earth; the powers and weaknesses of the characters; what other magical beings might be found roaming around — yet the answers I did receive in this book were completely satisfying. I never felt like Suzuki was making it up as he (I think it’s a “he” anyway….) went along.

Well, that is except for the fact that the story does seem to start off in one direction, and then abandons that for another direction a couple chapters into the book. As the above summary suggests, the book does look like it is going to be about Kouhei trying to break the boys apart, but by Chapter Three, that conflict is essentially resolved and Suzuki finds other, otherworldly obstacles to throw in the way of our heroes’ love. Ordinarily I might find that frustrating, but I suspect that Suzuki was so charmed and intrigued by the world he was creating, it was too tempting to resist exploring it (his author’s note at the end of the book seems to confirm that.) Even though I wanted to see more of the responsible and protective Tatsuki, it was the right choice.

Truthfully, I would have been delighted to see more of all the characters — and it’s a shame that this book looks to be a one-off. Each character feels three-dimensional with understandable and complex motivations. With the exception of one minor character in the unrelated short story at the end of the book, the “bad guys” never feel like cheap foils helping to move the plot along, which is so often the case — you can understand and sympathize for why they are doing what they are dong. And it is a quiet bit of masterwork to have heroes who seem so wrong for each other at the start so naturally evolve into lovers you are happy to see together in the end.

Which brings us to the sex, which as I said above, ain’t the reason to buy this book. While there is nothing graphically violent about the sex scenes, they are consistently portrayed as non-consensual, with a choked “no” almost always squeaking out of Ohta’s lips. Neither of the guys seems to be having a good time and often there seem to be tears in Ohta’s eyes either during or after. Our understanding of these encounters changes as we understand the characters better — and we do find out that ultimately, it is consensual — but during the actual events, it’s rather grim. In Honami’s author’s note at the end of the book, she laments to the editors about having to draw another “H” (Hentai: “perverted”) sex scene, and it shows that it was somewhat joyless for her to create them.

But when she is allowed to draw sweet, affectionate physical moments, the smiles appear and they are quite moving. As the book progresses there is less and less sex, but with the deepening and equalizing of our heroes’ relationship, it becomes more and more pleasurable to see these guys together. There is a close-up of a kiss near the end of the book that makes up for all the tears we saw before.

Nearly 180 of its 216 pages are devoted to the main story, but at the end, there is a section of very sweet slice-of-life scenes featuring all the characters we’ve grown to love — it’s a really nice way to say goodbye to them, actually. The creators’ notes — a favorite feature in manga for me — are quite charming and well-done. (Honami draws a simple, but very funny comic strip for hers — and I think I’m in love. 😉 ) There is also an additional short-story at the end of the book involving more non-consensual sex with a different, sweet house spirit (sigh).

Overall, a fun, interesting, moving and intelligent read with exceptional art and a romance you can get behind.