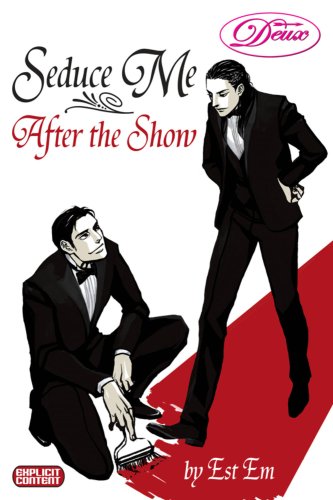 Art and Character Design: The kind of art my good pal Bill S. loves to pieces, yet most often leaves me frosty cold. Sketchy, ragged, messy are all the unfair words that spring to mind when I gaze upon the pages. And yet, even though I much prefer clean lines and naturalism, I can’t discount that the artwork is striking. This is not your traditional Tezuka-sensei inspired art: huge swaths of black take over the page, lines around the eyes seem to vibrate with energy and nothing seems solid or reliable — all of which is completely appropriate for the scenes that Est Em-sensei is shaping. Storytelling is for the most part easy to follow and compelling. And even I have to admit some of facial close-up are downright beautiful. What looks like amateur-hour at first reveals itself to be skilled and interesting work. And definitely the right choice for this material.

Characters: These are the protagonists that a far lesser work like Say Please pretends to promise, but can deliver only mere shadows of. These are truly complex and often difficult characters, who also always feel completely human to the reader and thus never feel unsympathetic. I throw around the words “credible” and “real” a lot when discussing characters in my reviews, but these characters are the first I’ve read for this blog that actually, truly seem like they could be real people. Real people who in a few words say the perfect thing to capture the mood or to comment on the interaction, but real none the less. In these five short stories, the characters’ motivations are as clear and understandable and messy and conflicted as yours and mine are. The dialog is natural everyday speech, but laden with meaning. And the characters are smart and insightful enough to always have something interesting to say, if perhaps ultimately not wise enough to actually find the love they seek.

Plot: So, you say you want something different than your “happy, pretty high school BL”? Then this is the real deal. Reading this book after coming from traditional yaoi is like walking into a Cassavetes film from an all-day Julia Roberts marathon. These are stories for grown-ups, my friends. Most of them concern hook-ups, but the sex is besides the point — it’s about the connections imperfect humans form: the ways we’re able to see each other, be with each other, and the ways we still always, ultimately remain alone. They’re pithy — volumes of character development are contained in just a few panels and one of the great pleasures of Est Em-sensei’s writing is the delightful contrast she creates between what the characters say and what they are thinking. Both sides of that coin have depth and both are used to help us fully understand who these people are. There are no huge payoffs for these stories, no big dramatic endings — just scenes of interesting people coming together and drifting apart. At the risk of overstating things, these stories have something to say about the human condition that is both subtly and compellingly executed. And most importantly, none of it feels contrived. (Well, actually one of the stories is tremendously contrived, but the payoff is so cute, you don’t mind being played with a bit.)

Romance: Sweet, wistful, sad — these stories evoke a variety of emotional responses, most of them ending with “alas!”. They’re too short and too raw for you to get swept up in the magic of love, but the humanity of the characters always makes you care. And overall, there is the mood of the book which you feel at the conclusion of each story — that to walk this earth is to be lonely but that none of us walk this earth alone.

Sex: Yes, there is sex. Yes, it feels necessary to the stories. Some of it is interesting. None of it is really hot. The sex is about the possibility and failure of human beings to connect, it’s not supposed to turn you on.

Overall: Well, hell, finally an 18-and-over book that you might honestly need to be over 18 to fully appreciate. These are thoughtful stories for grown-ups that subtly and compellingly share moments of human connection. It’s a book that you’ll read through and then immediately read through again just to savor the nuances. If you think that yaoi has the potential to be great literature as well as a great time, you need to buy this book. Hell, even if you don’t give a damn about great literature, buy the book anyway — it’ll be the best yaoi book you’ll read this year.

Rated by the publisher “Ages 18+ Mature” — motivated, one can only imagine, by the maturity required to truly appreciate this fine, tasteful work. Smut this ain’t. (This review is based on a complimentary copy supplied by the publisher.)

Plot summary from the publisher’s website (where you can also find 10 preview pages):

Seduce Me After the Show contains five short stories which take place in the artistic worlds of dance, painting and music, the overall theme being a dichotomy of hope and despair as well as passion and anguish. In the title story, devastated by the death of his world famous dancer mother, Theo Galland abandons his own dancing career to become a Hollywood actor and meets the famous Hollywood actor Daren Ferguson. What should have been a joking kiss shared between them takes a sudden turn, however, when Daren asks “So what comes next?” Theo answers “That depends on the scenario.” As lustful passions boil over, will Theo be able to regain the fire that he once possessed and return to the dancing world?

Boy, that description makes this sound like a boring time, huh? A much better cue for what’s inside can be found in supervising translator Matt Thorn’s blurb on the back of the book:

Though I may be biased, I believe est em is to Boys’ Love what Ursula K. LeGuin is to Science Fiction and Fantasy. She is not a good Boys’ Love artist. She is a gifted storyteller who happens to tell stories about men in love.

While I personally believe that someone can be a great writer of genre fiction while at the same time being a gifted storyteller, I get the distinction he is trying to make here. When one is a writer of genre fiction — be it a detective, sci-fi or Boys’ Love story — there is a temptation to be lazy. So much genre fiction is just meant to entertain, so much of that entertainment seems to come from superficial factors (“Oooh! Such great special effects!”) and so little respect is granted by the greater artistic community, that much of what is offered to readers and viewers consists of recycled plot lines, narrative cheats and stock, “straight from central casting” characterization.

And producers of that level of work get away with this because we as consumers of genre stories for the most part accept it — tolerating the schlock to get to a few moments of promised satisfaction and clapping our hands enthusiastically when a writer merely transcends clichÃ©.

Well, it doesn’t have to be that way. A writer who loves genre fiction can work in within their favorite category — for example, David Simon with The Wire; David Milch with Deadwood; Ron Moore with the 1st Season of Battlestar Galactica — and still create great art. Est Em is one of those writers.

If you are truly looking for satisfying, thought-provoking manga of male-male love, then look no further — this is it. And that this is her debut work, only makes the accomplishment that much more impressive.

In terms of the gay stuff, this all feels real to me because the characters all feel real. There are no actual ukes or semes here, except perhaps in the first story, and only if you’re a stickler for who’s penetrating whom. Really it feels like just a bunch of different guys trying to find love with other guys.

In terms of production values, they are for the most part fine — although this interesting art with its pools of black and expanses of white would have significantly benefited from superior paper stock. Many of the word balloons lack tails, which creates some occasional confusion. And while the translation is overall excellent, there is one story where they give some characters what I assume is supposed to be an American Southern accent to account for a Kyoto dialect. This is never a good idea. It makes the dialogue hard to follow — there is no standard way to write the various American dialects so it’s difficult to know which one exactly the translator thinks she’s using and frankly, even if we could suss that out, our personal associations with that way of speaking certainly won’t map to what the author originally intended. Just translate it clearly into standard English and give us a note if you think it’s very important that these characters are speaking in a special way, please. Really, trying to translate Japanese dialect into some American dialect is just trying too hard…

Because the truth is, the words in these stories can speak just fine for themselves — they don’t need any dressing up. Boys’ Love fan or not, this book is absolutely worth your time. Buy it. Read it. Hope for more.

OTHER REVIEWS: Danielle Van Gorder from Anime On DVD also finds the art challenging, but ultimately is very impressed with the work as well (giving some spoilers along the way). Jukebox of Boys on Boys on Film, on the other hand, is much less impressed (and reveals even more spoilers, including some biggies, so beware.) The Yaoi Review, giving away just one really important spoiler, rates it an “eight”. And now Deb Aoki over at About.com has a similar take to mine and, saints be praised, no spoilers!