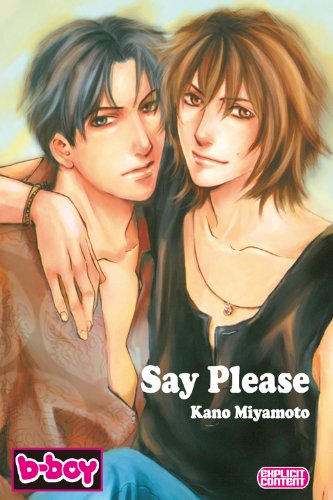 Art and Character Design: The character design is a bit more Western and naturalistic than some yaoi, and while not outstanding, was compelling enough to get me to pick this book up out of a sea of other titles sent to me by the same publisher. Every now and then, the eyes look a little wonky and uneven, but overall the expressions are compelling and the action/drama is easy to follow. The publisher provides preview pages on their site, so you can check it out for yourself.

Characters: Well, they’re all flawed and, from what I understand, that’s the point. Other reviews of this book stress how it isn’t “standard happy pretty high school or college BL” — which, yes, is true — and yet, I found the characters more unpleasant than complicated. The seme Sakura’s continual hostile and aversive comments to the uke Ryoichi soon felt one-note to me and Ryoichi’s subsequent proclamations of love likewise felt unmotivated. We never get deep enough into the background and minds of these characters to really understand them and I found myself drawing upon memories of similar characters from other authors to fill in the blanks.

Plot: Two stories here. In the main one, we watch a relationship between a john (high-school teacher Sakura) and a hustler (uke Ryoichi) develop from a one-night paid-sex encounter into a live-in romance. While that’s certainly not new ground, it’s an interesting enough set-up to offer an opportunity for some good character conflict, moral reflection and insight into the human condition. But don’t expect much of that here. We get very little feel for what it’s like to be a hustler in Japan (other than that it’s “boring” when there aren’t many clients), only the most obvious take on being a closeted gay teacher and almost no clue about what these guys really see in each other other than the physical. Sakura eventually (and predictably) wants Ryoichi to quit being a hustler — which seems like it would be a good source of conflict or at least an opportunity to explore what the two characters really think about the oldest professon — but turns out Ryoichi was ready to do that anyway, so no biggie. The best source of drama comes from an unbalanced high-school girl who has a crush on Sakura and who makes trouble for him with the school administration. When that plot point started to unfold, I found that I turned those pages with eager interest. But the rest felt fairly paint-by-the-numbers, “you know they should love each other so I don’t have to explain it” storytelling. The second, one-chapter story concerns a high-school student with a troubled past and a 27 year old man who seduces him. Just realistic enough to be troubling (it does feel like the adult is taking advantage of the loneliness of an outcast kid here), the relationships felt more believable and nuanced and thus the story was more compelling.

Romance: At best, the relationship between Sakura and Ryoichi could be called co-dependent. Hard to get behind that. And, as I said, the relationship between former Marine Stephan and high-school student Ryu feels more exploitative than sweet, so it’s also hard to get behind. At best, you’ll find these romances “interesting” — don’t expect to get swept up with the love. (Oh and Sakura roughs up Ryoichi, hitting him full on the face with no regrets, and Ryoichi, although upset, stays with him. True to life, maybe, but again, do you really want to root for these guys working out?)

Overall: I kept on reading it, straight-through. That says something. But this book shows more promise than actual skill. The art is competent and the author’s interest in complex relationships might pay dividends in future works but, despite the more ambitious material, overall the experience of this book feels like the same-old, same-old. From what I understand, this is not the strongest of Miyamoto-sensei’s works. There’s enough here for me to be willing to give another of her books a try, but I really can’t recommend you putting down hard earned cash for it.

Plot summary from the publisher’s website (where you can also find 10 preview pages):

Sakura meets first Ryouichi [sic] at a male brothel and buys him for the night. As their supposed one night stand ends up becoming a somewhat stable monetary based relationship, feelings start to change. Can these two awkward people garner the courage to admit that their true feelings run deeper than merely sex and money?

So, one of my personal blogging rules is that I don’t review a book I haven’t read through more than once. I find that there are nuances that can be missed on a first read and I want to give as competent a review as possible for my readers, But the truth is, I’m breaking this rule here because if I follow it, this review will never get written. Once is enough for Say Please.

It’s not a terrible book. It didn’t make me angry like White Guardian. It didn’t bore me to tears like Your Honest Deceit. There’s just not a lot that feels very new here. And the characters left me cold. So there we are.

The characters are clearly gay and identify as such and thus there is some perspective on what it’s like to be gay in Japan: It’s hard. Folks don’t accept it. But it’s not the end of the world. None of it feels false to me, nice to have gay characters who are actually gay, but there are certainly no surprises.

In terms of publishing quality, the book feels well made. The translation is effective. (Although with the balloon placement, it occasionally is a bit difficult to tell who is speaking at first glance.) The one thing I really missed, though, was an author’s afterword to these stories — I really wanted to get know her and her thinking with these works. Alas, there’s an ad and a credit page and that’s it.

The reviewers over at Amazon are much more enthusiastic about this book, so maybe it’s just not my cup of tea. But for now, while I respect the potential Miyamoto-sensei hints at in this book, I have to recommend you look elsewhere for a satisfying read.

(For other takes on this book and Miyamoto-sensei’s work in general, check out the thread over at AnimeOnDVD. And now a couple other reviews have come in: The Yaoi Review gives it a “five and a half” while Wiggle at Boys on Boys on Film believes you should just skip it altogether.)