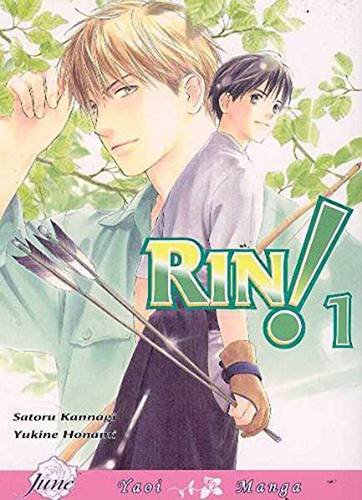 Art and Character Design: No one does adorable, boyish character art quite like Yukine Honami. She could draw a quick pencil sketch of your worst enemy and I swear you’d want to hug him. Thus, her work is completely appropriate for this story and a pleasure to view. There’s rarely much in the way of backgrounds in her art, but the character art is expressive, engaging and yes, huggable. You never have any trouble telling who’s who, and even when she just draws the barest minimum of a chibi outline, it feels completely appropriate for what that panel needs.

Characters: For the most part, they’re all a big pack of sweethearts. Everyone feels fairly three-dimensional and are consistent in their motivations. By the end of the book there’s nobody you don’t like or wouldn’t want to spend more time with — including the “rival” character, Kouichi. In fact, so sweet and caring is older brother Yamato with younger brother Katsura, the pair are downright slashable — for those who are into that sort of thing. 😉

Plot: There are no big surprises in this coming-of-age archery romance, but no false turns, either. Uke Katsura must learn to overcome his anxiety and stand on his own two feet and seme Sou has to learn to overcome his controlling nature and accept his feelings for the younger boy. And while this book is all about their budding romance and the emotions it generates, Kannagi-sensei fleshes out enough of the archery competition subplot so that it also feels like a fully relevant part of the story. Sure, you know how this book is going to end, but it’s a very sweet story complemented by very sweet art, so the journey is quite pleasant.

Romance: It won me over. I actually wanted Katsura to wind up with the laid back, caring and completely emotionally available rival, Kouichi — but then we all know that’s not going to happen when there’s a brooding seme waiting in the wings. As it is, the character development of our two heroes complement each other nicely and believably, and by the end, they felt like a good match. Oh, and yes, it’s all very, very sweet.

Sex: Let’s see… one completely obscured hand-job, four kisses and countless hugs. This is a 16+ book, so don’t expect it to get hot and heavy. But considering the cuteness (and very youthful appearance) of Honami-sensei’s uke, keeping it mostly to hugs was probably just as well.

Overall: If you feel you’ve seen it all before, then this book certainly won’t change that view. But if sweet high-school romance with likable characters and beautiful character art are enough to float your boat, then you won’t be disappointed. And at a nice, thick 228 pages, you’re getting a good value for your $12.95.

Rated by the publisher “For Young Adults 16+.”

Katsura, a second year in his high school’s archery club, has a hard time controlling his nerves. His “secret weapon” is his brother’s best friend and childhood buddy, Sou! One hug from Sou and Katsura’s nerves are soothed to a peaceful calm. But he can’t keep Sou around him forever. As he wonders how he’ll survive without Sou’s hugs, his friend Kouichi suddenly asks if he can be the one to save him, and kisses him! What now?!

So — one of Honami-sensei’s doe-eyed, adorable ukes needs a constant stream of hugs to control his panic attacks. Unfortunately for him, the only person whose hugs actually work is kind of a dick. “What now?” indeed.

I realize I’m not the first to say this, but it baffles me that loyalty, emotional availability and unambiguous affection aren’t considered tremendously sexy qualities in this world. Everyone wants an Aragorn or a Legolas, who are going to go tromping off fighting orcs, expecting you to just sit and wait for them, while nobody gives a second thought to brave and steadfast Samwise, who’s right there by your side, just waiting to tell you how great you are and fighting shoulder-to-shoulder with you against the worst the Dark Lord of Mordor has to offer. If I were ruler of the world, everyone would be lining up to tear faithful Sam’s clothes off, but alas, no one thinks to consult me on such matters.

Thus, it is a minor triumph of this book that the romance between sweet but fragile Katsura and handsome but bitchy Sou eventually won me over when the rival, Kouichi, seemed such the better choice. The secret? The heroes grow throughout the book to become better people and in 228 pages, they have time to do it believably. These two character weren’t right for each other when the book begins, but by the end they are — and the journey getting there feels natural, if fairly familiar.

This book is essentially a coming of age story where the main character, Katsura, learns to become a man in the arenas of sports and love. This being yaoi, the boy-who-would-be-man is awfully innocent and sweet — let’s face it, a hug addiction is not likely to be a 16-year-old boy’s primary character flaw in a mainstream Hollywood film — but most of the other story beats in this tale you’ve seen before.

Yet the characters are engaging and likable, so you still care. And, of course, this is in no small part due to Honami-sensei’s adorable character art — which will probably be the primary reason most readers will buy this book, anyway. They won’t be disappointed.

All the things you like from Honami-sensei’s previous work are here in full force — the very young, very cute uke; the believably older-looking, masculine, yet also cute senpai; the expressive and effective chibi characters. Clarity is a real strength for Honami-sensei — you always know what these characters are feeling and often, due to how evocatively they are drawn, you feel it with them. Being more of a story guy, I’m usually more interested in the writer of a graphic novel than its artist — but I would buy a book just because Yukine Honami drew it. And I’m sure I’m not alone in that.

In short, this is a very sweet, engaging, cuddly graphic novel — as familiar as your favorite down comforter — and at 228 pages, it can do just as effective a job keeping you nice and warm during a long winter’s night.