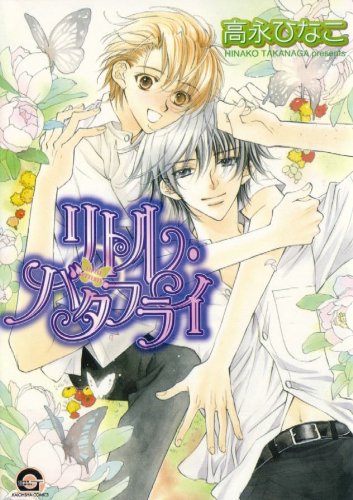 Art and Character Design: Quite nice. Panels are clean and uncluttered. With traditional big eyes and narrow chins, the characters are cute and charmingly expressive. Every character has a unique look, with plenty of engaging and beautifully rendered close-ups of our heroes.

Characters: Our heroes: Kojima — a friendly, energetic high school student who puts the “g” in genki (or whatever kana that might be…) — and Nakahara, fellow student and brooding outcast, just waiting to be brought out of his sulky cocoon. As in a lot of yaoi, our main character, Kojima, is emotional and angst-filled — but unlike a lot of yaoi, the emotions that consume him are mainly love and warmth and the angst he experiences almost entirely comprises concern for the well-being of others. Nakahara, starts off as cold and even a little bitchy, but as his friendship with Kojima deepens, we not only gain understanding behind the reasons why, we get to enjoy watching him come out of his shell in a believable way. They are characters that are a delight to spend time with. And while we don’t learn a lot about the background characters, they still feel like real people who have their own stories.

Plot: Engaging and not your standard seme/uke fare. Kojima pursues Nakahara, trying with all his cheerful might to start up a friendship with this loner, only to get more than he bargained for when Nakahara returns the affection with romantic interest. As in Takanaga-sensei’s Challengers, the characters’ motivations are believable and there is very little false tension. Nakahara’s backstory of family abuse gives depth to the romance, raises the stakes and adds conflict and challenges in a way that feels realistic and compelling. The book is a page turner.

Romance: So incredibly sweet. Both of our heroes are (ultimately) likeable and lovable — and yet only with each other can they find what they need. You want these two to get together and when they do, all you can say is “awwww…”

Sex: OMG! Fully clothed on the mouth kissing! Hard-core under the covers snuggling! And one of the characters might even get a — gasp! — erection! (We can’t be 100% sure because all the book says is “I could feel Nakahara’s body was responding.”) Hide the kids and lock up Grandma, this book is hot!

Overall: Not a book to get for explicit sex, there is still lots and lots of sweet, physical affection contained in its panels. The guys are likable, the plot is interesting and the art is good — if smart and very, very sweet yaoi is your thing, you owe it to yourself to buy this book.

Rated by the publisher “For Mature Audiences 18+” for reasons that defy human understanding.

Kojima seeks to befriend the class outcast, and soon learns of Nakahara’s troubled family life – of his uncaring, abusive father and mentally unstable mother. As Kojima yearns to somehow comfort Nakahara, he gradually becomes aware that his feelings for the other boy arise from more than mere sympathy. When Nakahara declares his own romantic feelings for Kojima, their relationship becomes one of sexual exploration as they face their first steps into adulthood together.

Here’s some personal sharing: I don’t have much of a sweet tooth. While I do enjoy a tasty pastry or apple crisp every now and then, when I have a food craving, it’s almost never for dessert. I’m a meat and potatoes kind of guy. But I make up for this lack of interest in sugary snacks with an incredible passion for sweet characters and romance. I just can’t seem to get enough of guy-on-guy affection and warmth and, while I make a lot of noise about liking clueless boys, in truth, it’s the sweet guys who capture my heart.

Thus, I decided to give another of Takanaga-sensei’s works a try — and, as you can tell, I was not disappointed. This book is from the June imprint of Digital Manga Publishing and the fit and finish are quite nice. It’s printed on high-quality newsprint with a dust jacket, the art is clean and the type is well laid out. (These ancient eyes especially appreciated the larger font in the word balloons.) And Sachiko Sato’s translation did a great job of conveying Takanaga-sensei’s wit and moments of poetic romance.

I do need to warn you, though, that the plot summary’s claim that “their relationship becomes one of sexual exploration” is very misleading as is the 18+ rating of this book. Now, I can understand a publisher wanting to err on the side of caution when it comes to putting out a comic — public opinion and the law tend to have a double standard when it comes to mature themes and sequential art here in the U.S. — but it’s a sad state of affairs when a publisher feels two guys hugging and kissing on the lips must be labeled “18 and over” while the video game industry is assured decapitation is just fine entertainment for minors. Perhaps the book gets a lot hotter later on as the trilogy continues, but really, I’ve seen spicier episodes of Cheers than what is shown here.

That said, if sweet affection rocks your boat, you will not be disappointed. Both the leads are good people with warm hearts and there are plenty of kisses and hugs throughout the book to keep you smiling. Even though Kojima’s initial interest in Nakahara at first seems superficial, the more we get to know these guys, the more worthy of each other’s love they seem. The obstacles thrown in the way of their romance make sense and rarely seem forced — or a product of annoying, narcissistic teen angst that can so often be used (in my opinion artificially) to create conflict.

Again, I never felt like Takanaga-sensei was insulting my intelligence. Easy conflicts that lesser writers would run with — a future plan being kept “secret” from Kojima; Nakahara’s dream threatened for the sake of a parent — get resolved quickly and realistically so we can be faced with more interesting developments. The characters, while believably young, feel as smart and capable as you or me, and thus they are easy to identify with.

Plot-wise, things flow smoothly. The chapter breaks feel satisfying yet make you want to keep reading. Plot twists happen at the right moments. Takanaga-sensei is a confident and skilled storyteller and even when she breaks a rule, such as telling not showing, it adds to our understanding as opposed to being a cop-out. For example, in narration, Kojima describes Nakahara as “eloquent, gentle and romantic” but only after we’ve first seen ample evidence of this with our own eyes. Compare that with Brother, which also makes use of narrated descriptions of characters, but there, instead of being a confirmation of what we have been shown, the author’s expects us to take her word for it and thus the technique merely feels like a shortcut to true characterization.

In the free talk section, Takanaga-sensei calls this work “a whole different flavor” from her comedies (and “close” to her heart). While it isn’t the laugh-a-page work Challengers is, her fine sense of humor and timing still shine through, and I found myself chuckling at least once a chapter. In general, there are so many warm feelings, warm characters, hugs and all around sweetness, it’s hard not to smile and chuckle your way through the story. This being my my second Takanaga-sensei book, I can’t help wondering if she doesn’t have the same sort of sweet tooth I do. I look forward to finding out.

It’s a charming feel-good book and, if you share my passion for extra sweet romance, you should definitely buy it.