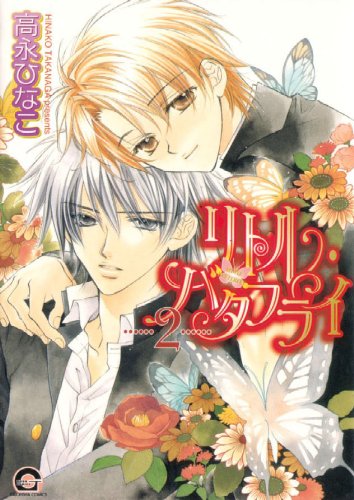 You can read a review of the first Little Butterfly book here.

Art and Character Design: More of the engaging and beautifully rendered shojo-style we’ve come to expect from Takanaga-sensei: The panel layouts are ambitious and interesting, adding to the emotional impact of the story, while only very rarely becoming slightly difficult to follow. The characters have spot-on perfect expressions for the emotions they are feeling and it is next to impossible not to feel those emotions along with them. Whether showing us sketchy chibis or nicely-detailed close-ups, Takanaga-sensei is a master at using art to tell her stories.

Characters: All the heroes and their supporters are three-dimensional and interesting with only the villain of the piece — Nakahara’s father — feeling a little one-note. Yet, even his actions feel motivated by the kind of person he is, as opposed to merely being conveniences for the plot. Our heroes — Nakahara and Kojima — are very sweet, likable characters with the right amount of strength for us to identify with, paired with the right amount of vulnerability so that we care about them as well. The major characters have complicated layers of motivations and goals and even minor supporting characters, like Kojima’s mother, feel like they have their own lives and interests. And our heroes feel like they have developed from the first book, with Kojima being clearer about his feelings for Nakahara and with Nakahara now much more out of his shell due to Kojima’s love.

Plot: As Takanaga-sensei says in her notes, Little Butterfly was “a complete story in its own right”, so in order to progress the plot, she introduces a new character we’ve never heard of — Nakahara’s young Uncle, Sugisaki, who used to provide refuge for Nakahara when Nakahara was a little boy — and who later became estranged from Nakahara’s family after standing up to Nakahara’s selfish and abusive father. His introduction felt a little rushed to me, but Takanaga-sensei uses him skillfully to forward viable conflicts from the first book, in particular whether Kojima will be able to get accepted to the same college that Nakahara plans to attend and whether Nakahara will be able to escape the darkness of his own family. Both conflicts are pursued in an engaging manner and moreso than in the previous book, Takanaga-sensei’s sense of humor really shines through in these pages — I found myself chucking several times a chapter.

Romance: Still very sweet, but definitely veering more closely to seme/uke territory, with Nakahara clearly pushing for a physical relationship and Kojima resisting this fairly strongly (although part of him clearly wants to be more physical as well.) Kojima still takes the lead emotionally, though, doing everything he can to protect Nakahara from the coldness of his father and repeatedly expressing a desire that he and Nakahara could live together. Seme/uke tropes aside, the romance remains believable and compelling with a number of scenes that show us what both boys admire and enjoy about each other.

Sex: Things do heat up a little bit more in this book, but again I feel that the publisher’s claim that “the relationship between the two boys becomes increasingly sexual” overstates things a bit. There’s some more kissing and even what might be a mutual masturbation scene, but the art is so obscure, the narrative so vague and Kojima so conflicted, it would take a CSI team to be sure. And again, everything feels a bit more straight-forward seme-uke here and thus familiar — but it never falls into anything non-consensual and the art (while often indirect) is still good. Can’t say it’s all that hot, but it is interesting in terms of plot and character development and promises more by book 3…

Overall: Little Butterfly 2 gives us more sweet and smart yaoi romance that will make you chuckle and smile again and again. If you liked the first book, you should definitely buy this one as well.

Rated by the publisher “For Mature Audiences 18+” for slightly more understandable reasons than the last book. 😉

Having decided to apply for the same school as Nakahara, Kojima must now study feverishly to pass the exams. Nakahara helps Kojima with his studies, but is frustrated by his strong sexual feelings that have yet to be reciprocated. Nakahara stays at Kojima’s home temporarily when things get sticky at home and the relationship between the two boys becomes increasingly sexual.

This is an 18+ work where you really get to know the characters and discover you like them: They all feel so intensely and passionately, you can’t help but chuckle, and often with recognition. For example, there is a scene where a startled Kojima manages to spill a tray of tea all over himself causing his mother to cry out “What is WRONG with you?!” but we’re right there with Nakahara when he thinks “Kojima… he’s so entertaining.”

Thus, it is a delight that their story is continuing through this second (and, then finally, a third) book. While there is definitely a part of me that wishes Takanaga-sensei would be a little more explicit with her sex scenes (for the sake of clarity, if nothing else), I’m happy to forgo the intimate details of what they do between the sheets so long as the focus remains on the sweet loving that’s in their hearts.

I buy yaoi romance because I want to feel the warm depths of attraction and love — and that is something that Takanaga-sensei delivers in Little Butterfly in spades. That I chuckle along the way just makes it so much sweeter.

(For a different perspective, check out Jen’s review of Little Butterfly over at Yaoi Suki. Again she was not quite as taken with it as I was…

And Hinako Takanaga is going to at this year’s Yaoi Con! You betcha I’m going to be there… 😉 )


Want to read more reviews like this? Don’t miss out! Subscribe and get them delivered right to you hot off the press!