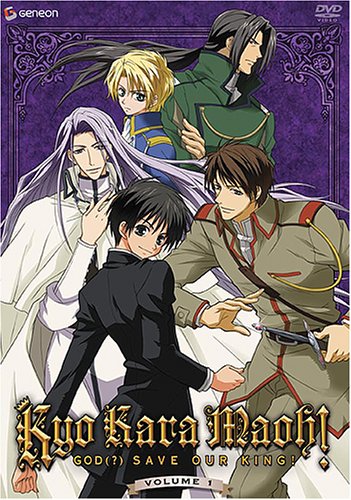 Art and Animation: Not exceptional, but fine for this genre. Somewhere within shouting distance of Tenchi Muyo!

Characters: Mostly two-dimensional archetypes, some would say stereotypes, with occasional moments that surprise you. Their actions and reactions are so consistent that many scenes, particularly the “comedy” scenes, can feel repetitious. That said, the characters feel right for a yaoi “harem comedy” and, if anime bishonen appeal to you, you will find much to like.

Plot: Uneven. The premise behind the series is a lot of fun — I’ve always wanted to watch a harem comedy where the clueless boy in question is chased around by other guys! But even though this is based on a series of novels, it often feels like they get one good idea — lets hunt for a lost artifact! — and then run it into the ground again and again until another good idea strikes them — which usually takes a couple discs. I don’t know if we’ll be able to come up with as useful a maxim as exists for Star Trek movies (“the even numbered ones don’t suck”), but it certainly felt like I had to wade through a number of redundant episodes to get to the good stuff.

Romance: Oh, they know who their audience is: you, yes you, fan of the boy-on-boy action and all things kawaii. And they will wink and nudge and do just enough to hold your interest. There are meaningful looks, suggestive situations, societal acceptance of (and, from some randy maids, fangirl enthusiasm for) homosexuality, lots of gentle in-jokes and our hero even gets engaged (accidentally) to another guy and continues throughout the season to stay engaged, but in the end, there’s not even holding hands. There are strong hints that the main character finds other guys attractive, but throughout this first season, any advances made on him by other guys is met with confusion and annoyance.

Overall: Such a mixed bag. I’ve given the reasons not to like this show above, and yet… and yet… I still can’t help but find it charming in its own annoying, teasing way. Getting to see an action-fantasy yaoi harem comedy is a treat, even if you have to wade through several episodes of pedestrian storytelling and Boys Love fake-outs to get to the good stuff, because just when you are ready to give up, it charms you again with its own brand of cute zaniness — like introducing an adorable and lethal Panda with acid for saliva and a heart of gold as a supporting character. I feel like my interests in yaoi and all things kawaii are being toyed with by the creators of this series and yet I’ll keep coming back for more. My advice, watch the first disc — if you like that one, it’s worth sticking around for the others, now that you have been warned. If you don’t, I bow to you gently with respect.

Rated by the publisher for ages “13UP”

Plot summary from the publisher’s website (EDIT:or, at least, it used to be — now it looks like Funimation is publishing this now and they have a different synopsis than the one I got from Geneon Animation):

Yuri Shibuya is an average baseball-loving high school student. One day, Yuri tries to save his former classmate from a group of hoodlums. Turning on him, they drag Yuri into the bathroom and push his face into the toilet. When they flush the toilet, he is transported to another world! Yuri is then taken to a castle and crowned King of the Demon World! Is he going to end up as the leader of the land, surrounded by his extraordinarily handsome lieges or will he make it back home?

OK, true confession time: I like harem comedies. Some time ago, watching Ranma 1/2 episodes on DVD rekindled in my heart an old love for anime — and now shows like Tenchi Muyo! (and similar flavors with a clueless hero like Oh, My Goddess!) somehow rock my world. Even though they are often predictable tease-fests — where everyone gets hot and bothered and no one finds satisfaction, where the characters stay essentially the same season after season — I just can’t get enough. Maybe I like my comedy just mildly raunchy. Maybe I like action mixed with romance. Maybe I just like clueless boys. Who knows? But if the tone is sweet, the harem is aggressive and the boy cutely flustered, I’m there. And from the moment I laid eyes on Ryoga feeling such passion (angry passion, but still) for Ranma, I finally understood the fun of slash.

And that’s how a lot of fans are describing this series — as “slashy” — even though all the characters are original and the sexual tension is deliberately implied. Perhaps it’s a matter of semantic degree:

And that’s the main appeal of this series. The comedy can be amusing, but it’s nothing exceptional. Many of the characters are appealing, but they seem mostly one-note. It introduces a number of fun and cute animal characters — I especially liked the baby dragon (and the panda mentioned above) — but they are merely guest stars. The fantasy world is somewhat intriguing, but is not especially innovative. There are actual moments of real drama and adventure, but they are few and far between. No, the real reason to watch this is because you’re a fan of those other harem comedies and you want to see what they would be like Boys Love style.

And, as I suggested above, this series delivers just enough of that to hold your interest.

In addition, it takes place in a fantasy world and the show takes its episode-spanning plots fairly seriously, so I found myself fairly often actually caught up in the magical adventures our hero, Yuri, lands in. There are magical artifacts to find, historical secrets to be revealed, new powers to be mastered, a few cool battles… Again, nothing especially novel — just enough to hold my interest.

And so I keep watching, hoping against hope that as the show continues, they will become more ambitious with their stories and a hell of a lot braver with their romance. I’ve now watched all the disks from the first season (except for the last two) and I can say that while this show certainly ain’t Wolf’s Rain — which in addition to having brilliant art and exceptional storytelling is what I would call truly “slashable” — it is, fairly often, a good time. Rent the DVDs through Netflix and watch your way through them when you are looking for distraction on a rainy day.

Who knows? Maybe it will work its teasing charms on you as well…

Want to read more Yaoi reviews like these? Don’t miss out! Subscribe and get them delivered right to you hot off the press!