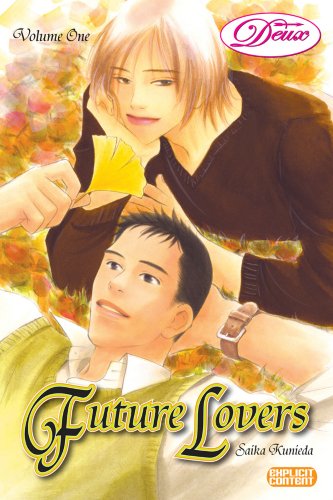 Art and Character Design: Very skilled and compelling. While keeping true to yaoi conventions, Kunieda-sensei shows a very strong sense of anatomy and layout and moves from a semi-realistic shojo style to fun and cute super-deformed and chibi depicitons seamlessly. Her semes look convincingly masculine and handsome and her ukes have the expected bishonen feminine beauty while still looking like dudes. It’s always easy to follow the action and understand what the characters are feeling. And the sex looks believable and hot. This is top-notch yaoi art.

Characters: They’re definitely yaoi characters, so there is some simplification of motivation going on here (i.e. they want the gay sex and go all the way immediately and frequently) but despite that, in the first, much longer story, our heroes feel exceptionally believable. A big selling point of this book is the sensitivity and skill Kunieda-sensei uses in introducing us to two very different gay men: one is ostensibly straight and dreams of pleasing his grandparents by finding a wife and creating a traditional family; the other is moody, flamboyant and openly gay. Neither are angels, but they are very likable. And both have strong and weak points that complement each other. You could easily see meeting them in real life and thus the story itself feels credible and the plotting natural. Secondary characters likewise have depth and I’m happy to say that the female characters are consistently strong, wise and appealing.

In the second story, though, while the characters are certainly cute — and I’ll admit I’m a sucker for little lost lamb ukes — the sense of realism suffered from the shortness of the story and perhaps some timidity in showing us what a relationship between two teenage brothers would actually be like. The interactions rarely felt honest. Unlike in the first story, I had a hard time believing these boys were anything other than figments of Kunieda-sensei’s (skilled) imagination.

Plot: The first and longest story follows the relationship of two high-school teachers who find themselves co-workers after a drunken, anonymous night of sex. The central question is: can these two overcome their differences and find love?

One of the great pleasures of this book is that Kunieda-sensei avoids false drama. (O.K. — there is one huge scene of false drama, but it’s essentially a practical joke on the reader, so we’ll forgive it.) When the characters are in conflict, their actions and reactions are completely believable for guys their age — nowhere does it feel like a character is freaking out just for the sake of the plot. This lends a feeling of realism to the work that’s refreshing and keeps you from feeling like your time is being wasted with contrived misunderstandings and hurt feelings just to fill pages. This is the story of two guys with very different personalities who fall in love and the conflicts they have with each other stem believably from those differences. Overall, their love story kept me wanting to turn pages to see what would happen.

The second story in the book feels much more pedestrian and familiar. It concerns two teenage brothers (one’s adopted, thus offering the obligatory “real incest” escape clause, though technically they are at least half-cousins — phew!), three years apart, who fall in love and hide their feelings until eventually everything comes out one night when they are forced to spend time alone. While their chibi versions do summon up the adorable, I found their actions not very believable, especially the younger uke, who is calmly and casually aggressive about wanting sex with his older brother. Unlike the first story, this felt more like fetish yaoi (albeit very sweet fetish yaoi) than an honest take on their relationship. There are some clever bits — including a baby rabbit made out of snow theme — but it all felt fairly contrived after enjoying the natural arc of the previous story. And there’s some false drama about an abortion of all things. Pity…

Romance: In the first comic, you like the characters, they seem right for each other and yet nothing is a foregone conclusion — this is a fun, believable love story.

The second story is definitely high on the adorableness factor — had the characters been believable, it might have moved me more than the first. But as I said, things feel rushed and contrived and, seeing as the heroes have been living as brothers since they were very small, it’s hard to believe that they really have any chance of living happily ever after now that they are acting on their feelings. Some sweet scenes to inspire your fantasy life, sure, but little more.

Sex: A few brief but definitely hot encounters. Despite the glowing cones of light (sorry ladies, no actual weenies here), I found the posing of the sex more realistic than what one usually sees in yaoi and, more importantly, the passion of the encounters felt palpable. Also unlike a lot of yaoi, nothing was confusing — you always knew what these guys were doing — without the sex ever becoming truly explicit. I personally need more than a few pages of sex — and a fair amount of set-up — to really get my motor running, but since 7-page-and-under sex encounters seem to be de rigeur for yaoi books, if you usually find yaoi hot, this book definitely delivers.

Overall: Likable, non-clichÃ© characters with real depth, great art and an exceptionally solid and credible love story make for a great read. Despite a somewhat weaker, more conventional B-story, this book is definitely worth your $12.95.

Kento Kumagaya wishes for just one simple thing: to have a happy family with the ideal housewife, loving kids, and kind grandparents all living together, happily ever after. Life, however, has other plans. Enter Akira Kazuki, a smart, beautiful and unrestrained gay man who shatters Kento’s dream with a single night of wild and passionate homosexual sex. This is a romantic, sweet and funny story between two different people (in more ways than one) who unexpectedly find the same future together.

So I picked up this book because it has an excellent reputation for being great yaoi storytelling and I’m pleased to say it didn’t disappoint. Yes, I might be hating on the second story a bit in my summaries up above, but that’s mainly because it pales in comparison to the first story. (And, like other “brother” yaoi stories I’ve read, it felt like it failed to live up to the potential of its provocative set-up. That said, unlike Brother which used the sibling relationship as purely fetish, Kunieda-sensei mostly uses it as a vehicle for a type of sweet protector-innocent dynamic which is actually far more compelling.)

The first story, “Memories of the Future”, starts out with a straight-guy seduction scene which certainly has the feel of traditional yaoi — the guy is swept away with the gay passion nearly immediately which as we know from amateur porn ain’t really how such things happen. (It actually takes more than a few great kisses to overcome years of internalized homophobia.) But that nod to convention aside, from a gay male perspective, these characters felt quite real to me as did their sex and romance. The openly gay character, Akira, utters the occasional self-loathing statement such as “A gay man like me can’t even dream of a normal family” but such bitter words make sense based on who he is and what he’s experienced and I never felt like they expressed the author’s personal view.

Also, as I said above, the women and girls in this book, while being secondary characters, don’t get short shrift. Kento’s “girlfriend” Yukie, while only seen in a few scenes, is nobody’s fool; his grandmother is as wise as we’d expect for her years — even the high-school student “rival” is at least as put together and level-headed as our heroes while still having an independent and vulnerable emotional life. It’s refreshing to find female characters in yaoi who are more than obstacles or set-dressing, but rather feel like real people.

Finally, I found the creator’s little “Assorted Ramblings” comic at the end to be charming and funny. She apologizes to the reader for her “shortcomings” in Boys Love art — not at all necessary, of course — and then goes on to discuss the challenges of drawing pubic hair and underwear. Cute! Despite her “inexperience” in the Boys Love genre, she seems very likable. That little peek into her psychology alone makes me want to read more of her work.

All in all, this book is definitely one of the good ones and thus joins Little Butterfly, Rin and Seduce Me After the Show as yaoi books I would recommend without hesitation. If you haven’t already read it, it should be the next book on your list.

(Other reviews of Future Lovers: Deb Aoki over at About.com is less charmed than I was by the first story, but still finds it to be fairly solid and superior to the second story. Julie over at Manga Maniac Cafe loved the book [but gives some spoilers in her review]. Kuriosity’s Lissa Pattillo, writing for Comic Village, found the book “refreshing” and a “pleasant surprise” and especially liked the humor and pacing [and she does an excellent job of explaining what’s great about the art]. Finally, Melinda Beasi writing for There It Is, Plain As Daylight blog, finds Future Lovers to be “one of the most engagingly natural boys’ love stories I’ve read” and offers some nice insights into the characters.)