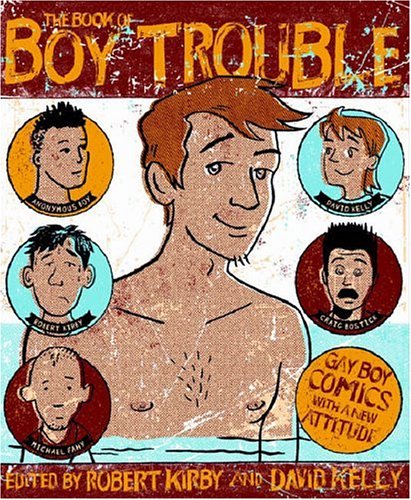 Art and Character Design: Not surprisingly for a book that arose from the “zine” movement, the art is very, very indie. While occasionally there are some panels that look accomplished (notably by creators such like Steve MacIsaac and Craig Bostick), most of the art in these strips look like something your best friend in High School could’ve come up with when he was working on his comic, with only a cursory understanding of anatomy and perspective. While I tend to prefer more naturalism and polish, I found this style actually made the stories more approachable and believable. Because most are essentially first person accounts of what it’s like to be young and gay, the raw art style added a layer of authenticity. I often found myself believing that the person who was drawing the story actually experienced it — or, at least, could have.

The character designs, while often simplistic, depict young boy-next-door types, most between the ages of 16 and 25. No hyper-masculinity or femininity here, just a bunch of regular guys leading regular lives — which also lends authenticity to the stories we are reading.

Characters: Believable and compelling. I found myself surprised at how accomplished the writing was in this book (especially being written by a number of different authors — kudos to editors Kirby and Kelly!) — and how refreshing that was in a gay comic. We meet guys just coming out, young punks at their first job, a guy crushing out on the Jamba Juice boy, a boy who tricks with a cherub and many other boys experiencing their first, requited love. With only a few exceptions, I found myself identifying with all the characters and most definitely cared about them and what they wanted.

Plot: These are all short comics (I think the longest is 10 pages) so the stories are more vignettes than anything else. But again, the writing is exceptionally strong and insightful. Even though I myself came out some time ago, I still found myself engaged in these young men’s stories and feeling like I was learning more about the human condition. From the first story (written in the 2nd person, revealing its intended audience) about an underage guy’s first experience in a sex shop back room to the (next to) last story about a young punk who gets stalked and used by an older photographer (and is kinda flattered by it) – the motivations of the characters are complex and human, so none of what I read felt trivial. And even though some of these comics come from the 90s, the writing still feels fresh and exciting. The book is engaging from start to finish.

Romance: Interestingly for a collection of comics with a punk, indie pedigree, most of the stories revolve around sweet, requited love. (I suppose even at the beginning of the 21st century, two boys loving each other for real is the most transgressive act of storytelling there is.) Even the one drama-couple gets interrupted mid-fight by an older man with his own very romantic story involving the love of a Middle Eastern king. While there are a few stories of love-from-afar pining, the impression you’re left with is of one of sweetness… and the possibility that you too could find real love.

Sex: Often quite explicit but rarely prolonged. And, of course, a bit hampered by the artists’ own limitations in linework. There were moments that were kinda hot, but they were so brief, it’s unlikely you’ll find the need to read this book one-handed. Food for future fantasy at best.

Overall: This is a great book of short comics — especially for young guys in the early stages of coming out. It pulls no punches when it comes to the realities of sex and drugs and feels totally real, but the overall tone is light, hopeful and full of energy. You aren’t going to hang any of the art on your wall, but you will definitely want to read each of these stories more than once. Even more authentic than Max & Sven, it should be part of every gay youth’s library. If you like comics of guys who fall in love with other guys, you should buy this book.

Something you hear again and again in comic book retailing is that an anthology is only as good as the weakest story in the collection. After having read this book, I don’t think that’s true. Yes, there are a couple of stories in here that were perhaps less than engaging, but when 95% of the content is absolutely outstanding, the few minor misfires just don’t matter. Particularly when those misfires are 5 pages or less.

This book really shows the advantage of the democratizing “zine” movement — now living on in blogs throughout the Internet — and that advantage is authenticity. Stories about young gay men in search of love have an inherent marketing appeal — and established publishers like Class Comics and Bruno GmÃ¼nder certainly provide much more polished looking work — but those stories don’t have anywhere near the authenticity these stories do. The stories by pro-publishers show young men as objects of sexual appeal — these stories written by the young guys themselves show us what actually matters to young gay men — and because of that perspective, that honesty, they are 100 times more compelling.

And while the art in this book is amateurish, the writing is anything but. More is said in one of these short comics than in the entirety of a book like Side by Side — and it’s said eloquently, with wit, humor and poignancy. The publisher’s blurb says they took the “greatest hits” from the zine for this collection and all these stories do in fact feel quite well-chosen, truly the cream of any crop of short story writing. I tip my hat to editors Kirby and Kelly.

To be honest, I was surprised how solid a book this was — and how thoroughly I enjoyed reading every story. If you care about more than pretty pictures in your gay comics — or if you’re a young gay man trying to figure things out for yourself — you should absolutely buy this book. It gets my strongest recommendation.