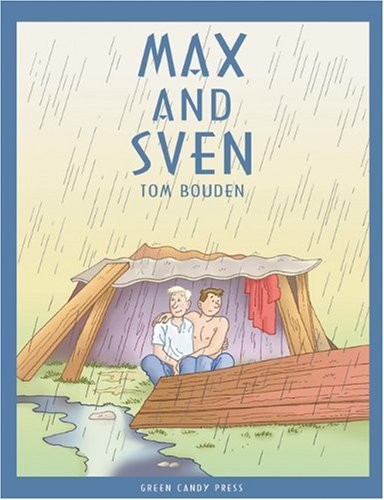 Art and Character Design: Anatomically correct, black-and-white newspaper cartoon style — think For Better or For Worse, but with explicit sex. (Shout out to all Michael and Lawrence shippers!) This style of art is completely appropriate for the format, which while often poignant, is mostly light-hearted and jokey. Characters are expressive (although not much caricature occurs) and, while simply drawn, I had no difficulty distinguishing who was who or what was going on.

Characters: Believable, three-dimensional and very sympathetic — in many ways, the opposite both in art and depth to the characters of Side by Side. While Bouden is not above going for a cheap laugh at the expense of realism, the characters feel real. As a gay man, I saw myself and my friends in them throughout the book.

Plot: The story is one that a lot of gay men will be familiar with — the intense crush on your best friend, fueled by your own silence and not knowing whether he might feel the same as you. It is an almost universal experience among gay men who were closeted for some time in their teens and one which will resonate with anyone who has ever had a secret crush on someone very close to them. In first person, Max narrates for us his personal discovery of attraction to other boys (starting in his early teens) and how the entrance of transfer student Sven Smulder into his high school class changes his world forever. With both art and words, Bouden does a great job of recreating the feelings of an instant crush that only deepens when the two boys discover a profound liking for each other.

Max falls head over heels in love, the question is, does Sven feel the same way? You will believe — and you will care.

Romance: The friendship is believable as is the attraction — and Max is so likable, you want things to work out for him. When reading this, you are routing for them as a potential couple. Whether that actually works out, though — well, you’ll just have to read to find out… (although the publisher’s blurb below and my comments underneath them will spoil that for you — fair warning)

Overall: An often funny, truly poignant and honestly illuminating view of what it is to grow up gay at the turn of the millennium. Despite its cartoony art and occasional comic misfires, this book has characters you care about wanting things that matter. Out of all the books I’ve reviewed so far on this blog, this graphic novel does the best job of sharing what it is really like to be a young gay man — and it does so in an entertaining and engaging way. If you are looking for a good story with many good chuckles and some hot, cartoony sex, you should buy this book.

Max and Sven are childhood friends who maintain their friendship into adulthood despite Sven’s being straight and Max’s being gay. With equal doses of laugh-out-loud humor and wry insight, artist Tom Bouden highlights and dispels many misconceptions about gay and straight culture. Created in 1990 as part of an advertising campaign for a gay youth club, Max and Sven quickly rose to stardom with leading roles in their own comic.

One of my favorite manga series is Genshiken, a study of Japanese otaku culture where the boys talk about their attraction to “2D women” — meaning an honest and real sexual and romantic attraction to, let’s face it, not very realistically drawn anime characters. While many of my friends scratch their heads when I discuss it, I too have strong attractions to 2D characters — in my case, it would be 2D guys.

It started with the fox from Disney’s Robin Hood when I was a very little kid and continued on through adulthood with characters like Ryoga on Ranma 1/2. Now, I find it very interesting that I develop feelings for characters drawn in a cartoony style, especially because I prefer a more naturalistic style with my own erotic work. Scott McCloud offers a potential explanation of this in his must-read book, Understanding Comics, where he states that the more cartoony and less realistic the character art, the more universal that character will feel to readers — which he argues makes that character easier to sympathize with. When I think about the 2D guys that have turned me on — Ryoga, Tenchi, Kanji Sasahara — I have to think at least some of that universality is in play for me — that my own mind is filling in the blanks to create the kind of guy I am really attracted to in the real world — because if I look very closely, I see how simple the drawing truly is and the “illusion” of an actually date-able guy will disappear.

But whatever the reasons, for me, the emotions are very real and very strong. (So strong I decided to create my own yaoi — “buying the company” as it were!) And if you are also capable of crushes on 2D guys, then this book will have erotic appeal to you in addition to being a satisfying coming-out story. As I’ve said the sex (while never gross) is absolutely explicit with full on views of naked, erect penises and young guys engaging in the full spectrum of mainstream homosex. In addition to making us laugh, Bouden definitely wants to turn us on (and in a later book, he tries to do so exclusively). For me, in this book, that was successful — you’ll have to look into your own heart to decide whether cartoons can do that for you.

The main goal of the book, though, is to make you laugh and, for the most part, this was successful for me as well. While the desire for a punchline felt occasionally a bit forced, a lot of the humor is truly funny and I chuckled out loud more than once. As a gay man, I found this book to be an very accurate depiction of the feelings of growing up gay — dead-on accurate, really — and the humor certainly helps make even the darker parts of that experience entertaining and light. The one caveat I would offer to the straight reader would be that Bouden overplays the in-joke gay stereotypes for humorous effect — the gay characters Max meets are completely poly-amorous, have sex constantly and, for the most part, are fickle and shallow (if never mean-spirited). I personally have only encountered the hyper-sexual, never monogamous gay guy in movies, books and “friend-of-friend” stories, never in real life. But when I was coming out, I remember believing very strongly that that is what the gay community I was about to enter was really going to be like — and as these comics were written for gay youth, I can see why Bouden chose to satirize this view. And our protagonist Max himself certainly doesn’t live up to that stereotype, which makes all the difference when comparing this book to the much more shallow Side by Side.

Another thing I really liked was the depiction of Sven as Max’s straight-but-not-narrow best friend. His character really felt true to the open-minded straight guys I’ve been close to over the years — sweet guys who, in the interest of being accepting, sometimes even put up with too much. (There’s a scene where poor Sven cheerfully attempts conversation with Max’s roommates who are in the middle of having anal sex because he needs to borrow the honey they are using.) There were a lot of moments with Sven that just felt very real to me — including the fact that, before Max comes out, Sven is much more accepting of gay rights and relationships than Max appears to be. Which makes sense, because the whole issue just isn’t as charged for him. As a teenager in the 80s/90s, Max is growing up among the first generation of young straight guys comfortable enough in their sexuality to not feel threatened at all by gay guys. Max & Sven does a great job of showing the kind of friendship that can blossom between a young gay man and a young straight man — and that alone is worth the price of admission.

Published on thick white paper, I would say the printing quality is only so-so, with the ink looking slightly faded in places and the lettering occasionally a bit off-center. Considering the black-and-white cartoony style of art, I did not find that to be a big deal. And, originally published in Dutch, I found the translation to be excellent — including some impressive translation of the word play and puns Bouden appears so fond of. At $13.95, it might feel a bit steep for a 96-page black-and-white comic, but with an average of 16 panels on each of its magazine-sized 8.5″ x 11″ pages, I found reading it to be the proverbial “satisfying chunk” one looks for in a graphic novel and completely worth the money I spent.

In short, I think you should buy it. It’s a good time, it’s exceptional as a gay comic both in its choice of topics and their treatments and you’ll be the wiser for it.