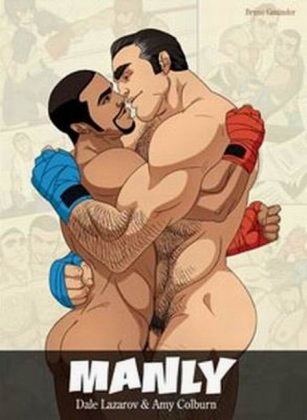 Art and Character Design: Amy Colburn’s art uses a very clean line and is easy to follow — there is never any confusion or hesitation for the reader in terms of what is going on and where to find the next panel. Dominic Cordoba’s coloring, while simply rendered, is bright and pleasing.

The character design leans towards the cartoony and, interestingly enough, is quite similar to what one usually sees drawn by Western gay men. There are all the usual “enhancements” to the male physique — huge cut muscles, perfectly shaped bubble-butts, extra large “packages” bulging in the pants. As I’ve said before, these enhancements aren’t really my cup of tea, but the look is so predominant in gay Western comics, I imagine I’m in the minority.

Colburn’s characters are expressive, often charmingly so — and her skill in making the inner life of the characters clear through those expressions is what keeps the conceit of using no dialog for the entire book afloat.

Characters: Well, none of them are allowed to talk, and they are mostly having sex, so don’t expect a lot of nuance. That said, all of them are good-hearted without a lick of meanness in them. There’s an older boxer and a younger boxer, a shy bald guy and a “hot” librarian, a clean-cut middle-aged cop and a blonde civic-minded bystander with a mane of golden hair.

We get hints at some deeper inner life, mostly as context for the way our couples couple — the cop and the blonde guy both seem closeted and approach each other indirectly; the bald guy is clearly new to the gay scene and has to learn to navigate it in pursuit of a guy he likes; the older and younger boxers have each fantasized about each other for some time, even though this is clearly their first meeting. But with the exception of the “hot librarian”, there is only so much depth to them — they all feel like types you’ve seen a fair number of times before. And I can’t really tell you what the librarian’s deal is, just that it seems like he’s got layers. I might have liked to explore them some (in a purely literary way, I assure you), but alas the need for immediate sex left little time for that.

That said, all the characters are likable and have their own distinct personalities — and the fact that they’re “types” makes this dialogue-less story easy to follow (and perhaps adds to the hotness for some).

Romance: Everyone likes each other. Everyone is sweet to each other. There’s kissing. There’s cuddling. There’s a real sense of equality between the partners. Due to the shallowness of the material, you aren’t going to get swept away with the romance, but there were definitely moments that made me smile. And the warmth between all the characters was frankly very refreshing.

Three stories intertwine, observing men doing what they love to do best!

Dale Lazarov’s sensual-sexual storyboard combined with Amy Colburn’s brilliantly drawn masculine figures result in a celebration of carnal desires! These stories get by without words, which allows the fantasies of the viewer to take flight.

Unfortunately for this man, I need a fair amount of character and relationship development for my fantasy to “take flight” and the constraints of this book offer only limited amounts of both.

The “no word balloons, no captions, no sound effects” format is an interesting one and, as a lover of words, I was curious why Lazarov made that choice. (And this is not the first work he has written in this style. Both STICKY and FANCY are written this way as well.) In email, he answered my question:

And yet, it always did come off as a conceit to me. There were moments where there clearly was meant to be talking, but instead we get pantomime. It takes a skilled writer to pull this sort of thing off at all — Joss Whedon’s Hush comes to mind — so Lazarov is to be commended. But I found I missed the words. It did make for a quick read (I was able to read the book twice in under an hour) — whether that is ultimately a good thing or not depends on how deeply you want to immerse yourself in the world of a book.

For another view, Tina Anderson, who turned me on to the pre-release copy of this book, has a very balanced positive take over at Guns, Guys and Yaoi. (Oh, and she has pics from the book that show penis, if you’re into that sort of thing…)

Psst! Want a free full-color yaoi comic? Just sign up over at our Free Comic page and we’ll send you the download link!